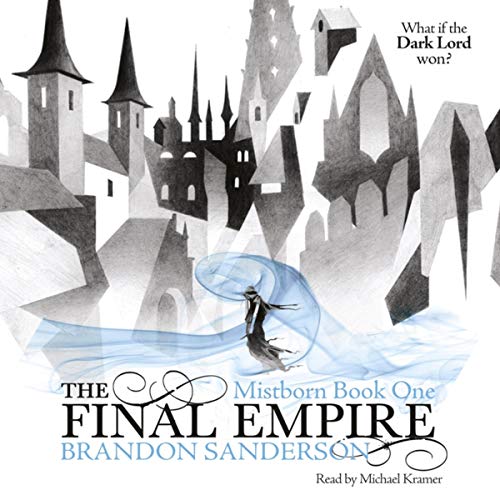 Great recommendation from Audible. Despite the 24+ hour listen time, this book maintained a consistent pace throughout. Good exposition – though light on some descriptive details – and a great new magic system that still remains grounded. Good action, politicking and story. The denoument was well constructed with nice twists in the run-up and I am looking forward to the sequels and other Sanderson works.

A thousand years ago evil came to the land and has ruled with an iron hand ever since. The sun shines fitfully under clouds of ash that float down endlessly from the constant eruption of volcanoes. A dark lord rules through the aristocratic families and ordinary folk are condemned to lives in servitude, sold as goods, labouring in the ash fields. But now a troublemaker has arrived and there is a rumour of revolt. A revolt that depends on criminal that no-one can trust and a young girl who must master Allomancy – the magic that lies in all metals.

This is the first single novel I have picked up of this length. I was daunted at first – I thought that Iain M Banks works were long, but this was another order entirely. However, the story was easy to get into and moved along swiftly enough to keep me engaged and wanting to find out more. There were very few times I took a break of more than a few days from this book (my schedule is hectic and I can’t always listen for more than a few minutes sometimes) and I wanted to marathon the last couple of hours as we approached the end. That in itself is also a first for me.

I concur with the other reviews you may read about Sanderson’s work. This is great fantasy fiction and a recommended read if you like this genre and are looking for something that blends all the good elements: good magic, a well thought-out world, interesting characters and an adult approach. It still leaves questions unanswered at the end, though only to set-up the second book in the series. However, these are not major threads that leave you feeling like the book is unfinished. It is not, and completes the arc from start to finish.

To quote from the publisher:

Then, when hope was so long lost that not even its memory remained, a terribly scarred, heart-broken half-Skaa rediscovered it in the depths of the Lord Ruler’s most hellish prison (the Pits of Hathsin). Kelsier “snapped” and found in himself the powers of a Mistborn.

This is essentially the prologue and the set-up. The story unfolds further as Kelsier (Kel), a brilliant thief and natural leader, turns his talents to the ultimate caper, with the Lord Ruler himself as the mark. Kelsier recruits the underworld’s elite, the smartest and most trustworthy Allomancers (Mistings), each of whom shares one of his many powers, and all of whom relish a high-stakes challenge. Only then does he reveal his ultimate dream, not just the greatest heist in history, but the downfall of the divine despot. But even with the best criminal crew ever assembled, Kel’s plan looks more like the ultimate long shot, until luck brings a ragged girl named Vin into his life.

Like him, she’s a half-Skaa orphan, but she’s lived a much harsher life. Vin has learned to expect betrayal from everyone she meets, and gotten it. She will have to learn to trust if Kel is to help her master powers of which she never dreamed.

The story starts out with Kel causing some mischief, and then switches to Vin’s thieving crew and introduces us effortlessly into life in the city and the different groups – Nobles, Inquisitors, Skaa, the Steel Ministry and the Prelans. Both Kel and Vin’s stories seem completely unrelated, though come together nicely and help explain the different groups, their interplay and so define the world we are introduced to. The novel then introduces us to Kel’s own thieving crew, though his crew is built on trust and Mistings and has a much loftier agenda.

I won’t go into details of the story, save to say that it embodies all the fantasy essentials you would come to expect in a package you won’t, and excellently told. There is the essential all-bad evil, prophecies, legends, magic, strange creatures, nobility, politics, action, and everyday life for the main characters.