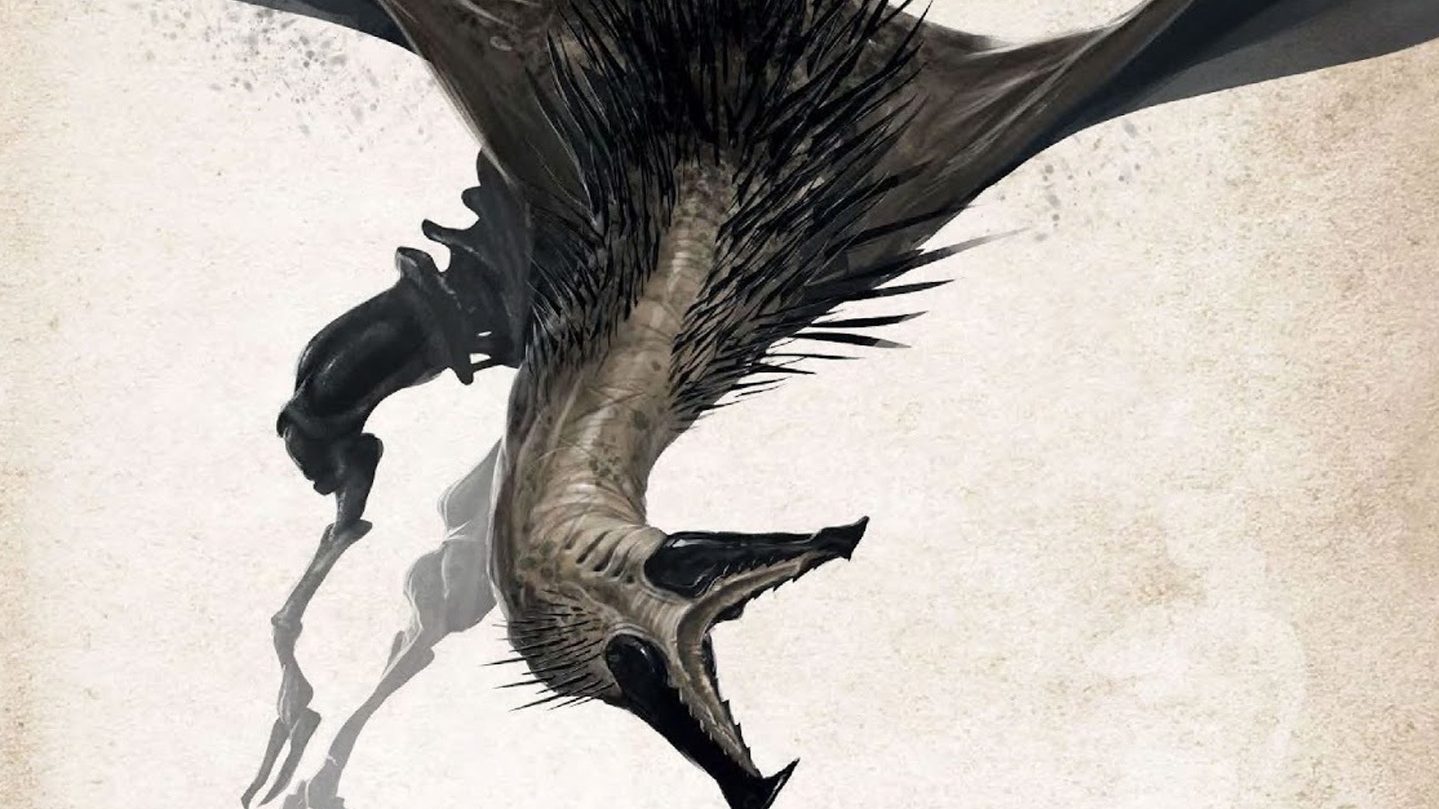 The church congregation had just started to head home after the service when three bat-like aberrations descended from the heavens like fallen angels. Wrong time. Wrong place.

Not wholly human, nor completely vespertilian, their bodies glistened as they came, tumbling through the night sky with abhorrent and deliberate ease. Their wide, empty, white eyes pierced the darkness which cloaked them. They struck with frightening voracity, precise in every manner, their three-clawed feet stretched out to welcome their prey.

James was first; the razor-sharp claws pierced his torso and closed around his ribs, blood running from the incisions. It closed a stunted, clawed hand around James’ head to steady itself and with a swift motion, its muscular legs tore open the rib-cage. The cadaver fell back, the predator standing proudly atop its trophy rending flesh from around the still beating heart.

Turning back towards the church, she ran from the forsaken sanctity of the once peaceful graveyard. John too turned to flee, but was struck from behind by a second creature and thrown to the floor. Landing quickly beside him, it closed its tongueless maw around his head. Mary watched John’s eyes fill with fear and anguish as she glanced back over her shoulder; “Run!” was the last word she remembered of him as the creature cracked his fragile skull like a nut in a vice.

She fumbled at the church door. It was old, an almost forgotten piece of Caledonian architecture, but its symbolism still kept alive by the crofters. She glanced again at the charnel scene; a third creature landed a few yards away, crouched and then stood half upright in the eldritch light cast by the near full moon. It rested its bulk on its right arm while the other swung loosely at its side. After briefly surveying its companions, it swung its gaze to meet hers, staring blankly through and into her, rooting her to the spot. It hopped closer, staggered and lolloped, ungainly in all of its movements. A noise inside the church snapped her back into action and she fumbled again at the handle.

Its face filled her view as she glanced over her shoulder; its breath stank of decay and she felt its mind invade hers. Retching, she unlatched the door and stumbled backwards into the church. She bumped into the pews, regained her balance and fled to the altar where the pastor was clearing up after the small service, oblivious of the blood-lust outside. James, John and Mary had been the last to leave.

The creature observed the doorway with curiosity. It had never seen anything of its ilk and regarded it with mild contempt. Tentatively, it touched the lintel and withdrew.

“Calm yourself, Mary,” soothed the priest as she fell, crying, into his arms.

“It’s … but … John …” She was hysterical and fainted. He leaned back against the altar rail and cradled her head in his hands.

“There, there,” he said softly and whispered a small prayer for her.

Feeling the portal to be safe, the creature stepped through, bracing its stance on each side of the frame and pulling itself up to its full height, blocking the doorway. It was then that the priest saw it.

“Mother of …” He stopped himself. “Forgive me,” he whispered.

Mary regained consciousness and began to sob once more. A tear rolled along her nose and spread on his sleeve, unaware that the beast was now in the church.

“Satan, be gone,” bellowed the priest across the empty pews, startling Mary. “You are not welcome in the House of God,” he continued raising his crucifix.

Mary looked round and screamed, staggering back against the altar rail. In two bounds the creature was perched on a pew a row from where they stood. Splinters of beech wood rained to the floor as its claws chewed into the seats. It leaned forward and rested its clawed hands on the front bench.

“What manner of creation are you?” the priest formulated aloud as the beast hopped onto the floor in front of them. It outstretched an arm and caressed her cheek with its claw, cutting a layer of make-up from her skin with the delicate precision of a surgeon. The priest moved to stand between them, but, with a rapid flick from the creature’s free hand, was launched across the altar dais.

Undaunted, it continued; another sliver of make-up tumbled to the floor. Mary stood trembling, transfixed with fear, tears rolling down her cheeks.

“Why?” she felt a voice buzz like an insect inside her head, deep and resonant. She knew she was being interrogated but failed to comprehend why. Its mind sifted through hers leaving no stone unturned. She could do nothing while this alien librarian probed her. The priest clambered upright and began to move towards them. It shot a glance at him and he faltered.

A couple of minutes passed while it gazed deep inside her, searching.

Finally, it raised its head and Mary fell to her knees, released. It stroked her cheek with the back of its claw, holding it for a brief moment as if apologising for what had just happened and within her, strangely, she could feel its sorrow. Outstretching its tattered wings it launched itself through the stained glass window. The others joined it in flight, leaving the dismembered remains scattered in the graveyard.